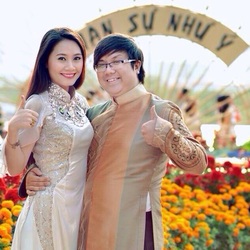 A famous Vietnamese actor - who is also a director of a popular Entertainment company in Ho Chi Minh City - posted on his Facebook asking people for contact to buy bear bile for his wife. According to the actor, his wife suffered a motorbike accident and her leg was bruised for 2 months. He felt sorry for her and wanted to buy her "pure bear bile" to make up for it. He also stressed "Please tell me where I can buy "real pure" bear bile".

The actor has more than 10,000 followers and nearly 5000 friends on Facebook. Though he posted his Facebook status at 2 am in the morning, there are already more than 40 "likes" and many more comments. Some people even gave him a mobile phone number and stated "Just ring this number, they will bring it to your house". Some people suggested other type of treatment, as according to them "bear bile has a horrible smell". None of these comments mention the poor conditions in which bears are kept on the farms, or that buying bear bile is against the law. It is obvious that many Vietnamese people still have no awareness of such laws, or the welfare of wild animals.

More than 2,400 bears – mainly moon bears, but also sun bears and brown bears – are kept on bile farms in Vietnam. The bears are milked regularly for their bile, which is used in traditional medicine.

According to Animals Asia, bile is extracted using various painful, invasive techniques, all of which cause massive infection in the bears. This cruel practice continues despite the availability of a large number of effective and affordable herbal and synthetic alternatives.  Most farmed bears are kept in tiny cages, some bears are put into cages as cubs and never released. Bears may be kept caged like this for up to 30 years. Most farmed bears are starved, dehydrated and suffer from multiple diseases and malignant tumours that ultimately kill them.

Here is the facebook link of this actor: https://www.facebook.com/royal.giabao1

Information about this case have been sent to the Vietnamese environmental police.